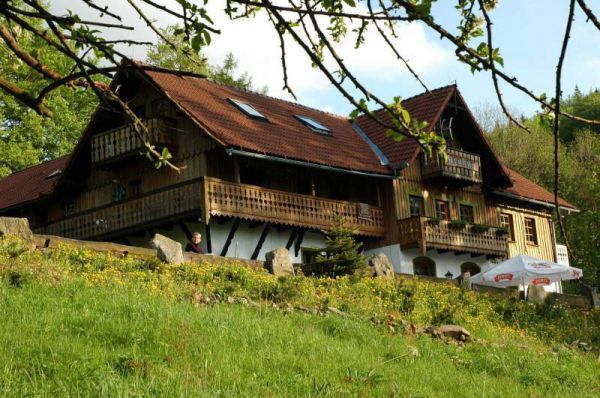 
Międzygórze is undoubtedly one of greatest attractions of Kłodzka Valley. It's one of the most beautiful climate stations in Sudety Mountains. It's also unquestioned recreation, sports and tuorist capital of the region. Międzygórze is a perfect starting point for trips to the Massif of Śnieżnik and Bystrzyckie Mountains. There is also plenty to do for ski-lovers. The climate is mild, favouring active recreation and convalescence. Międzygórze is started welcoming visitors as early of 18th Century. The architecture preserved until this day adds a lot of charm to the town and decides about its unique character resembling that Swiss or Norwegian mountain towns and villages.

Międzygórze and its direct vicintly is the site of numerous interesting places well worth visiting. Ogród Bajek (Fairy Tale Garden) - a garden full of fairy-tales characters and miniature buildings carved in wood, situated at 780 meters above see level, over a waterfall, between Mount Igliczna and Mount Toczek, approx. 20 minutes from the centre. Wilczki Waterfall is another no attraction. The waterfall cascading from 20 metre high rock cliff is one of the highest in Sudety Mountains. A lot of marked tourist trails lead to surrounding hills, including the highest peak of the region Śnieżnik (1425 meters) - the target of numerous trips. In winter, the skiing conditions are perfect, and there are plently of skiing slopes.


No deatils about prices found.

More than 20 000 offers accommodation listed on one site! We invite you to enter our site because it is on, you can find accommodation in virtually every corner of our beautiful country. We can be sure that we will find something suitable for everyone. The search engine that you can use, we can easily find the accommodation that suits your requirements.